2022 BMW 5 Series BMW is leaking like water through a filter as of late, and leaked photos of the new 2022 Series 2 coupe and the new iX3 crossover hit the internet this week.

And now BMW has another new model launched before its official debut: the 5-Series 2022. According to a post on the BMW Bimmerpost fan forum.

When the current 5-Series G30 was released, it didn’t look much different from the cars that came before it. Fun fact: BMW calls the mid-cycle update the “Lifecycle Impulse”.

We’ll stick with the term facelift, and it looks like the facelift made to the exterior of the upcoming 5 Series brings a styling that is much more in line with that of the current 3 Series.

Seen here in the form of a 530e petrol-electric hybrid, this refreshed Series 5 appears to sport the front bumper of the M-Sport package and a new set of multi-spoke wheels.

Missing from the car’s design is hints of four circular headlights. Instead, this model adopts a “double hockey stick” daytime running light.

Please note, this is a leak from the European spec car, which means that there may be some changes that separate this model from the North American spec model. One thing that is unlikely to change is the updated 5 grille size.

That’s great because unlike the other Bimmer, the facelifted Series 5 grille looks the same size as the one affixed to the current car. Maybe BMW listened to our complaints.

The new 5-er also has fresh taillights and might get an update to the cabin too. Updates to the infotainment settings, some new technology, and possibly an update on the powertrain and suspension are all available for the mid-size BMW sedan.

We won’t know for sure until BMW completely unwraps it. Until then you can look at these photos and decide for yourself whether you like the new look of the car or not. 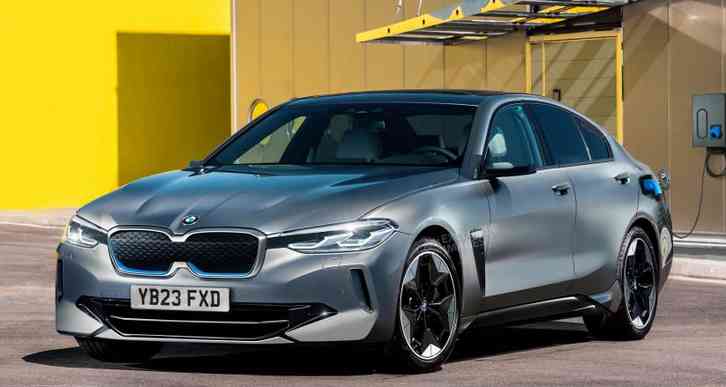 The next-generation BMW 5 Series will be available with a fully electric powertrain option and will go on sale in 2023.

This means that the brand’s premier executive sedan will rival the upcoming Mercedes EQE saloon – the all-electric sibling to the E-Class – and the Tesla Model S.

These new models will follow the BMW iX3, i4, and iNEXT SUV, all of which will launch before the end of 2021.

And like those cars, the electric 5 Series will likely carry the prefix ‘i’ – the BMW i5 – to differentiate it from the petrol, diesel, and plug-in hybrid models that will continue in the next generation.

It is not known whether BMW will offer a pure electric version of the car in the styling of the sedan and Touring estate.

However, judging by the electric versions of future BMW core models, such as the iX3 and i4, it seems safe to assume that the i5 version of the 5 Series will feature some unique exterior design changes that will make it an all-electric model, as shown in the image. our exclusive.

While the main details of the new model are a bit far off to confirm – BMW just did a facelift to the existing 5 Series – we can draw some possible conclusions about it from the current model and the brand’s imminent electric release.

The existing and recently revised G30 5 series is based on BMW’s modular CLAR technology, which uses high-strength steel and lightweight composites in its construction.

The next-generation model will likely use the latest version of this platform, and given that the iX3 SUV shares the same foundation, EV technology will likely carry over as well.

The IX3 is the first BMW to use the company’s fifth-generation electric drivetrain.

On the X3-based zero-emission SUV, it consists of a rear-mounted 282bhp electric motor mated to an 80kWh battery – great for a range of 285 miles. The new Series 5 electrics will likely boast similar statistics.

In total, 25 new electrified models will be rolled out across the BMW Group by 2023, with roughly half of them ditching all forms of internal combustion engines altogether.

If the regular engine continues to run, 48-volt mild-hybrid technology will be used to help further improve fuel efficiency.

Although BMW has promised a total of new models in 2023, the current 5 Series life cycle means that the new i5 will likely be released towards the end of that period.

BMW has also confirmed that other models in the core lineup of the marque will receive a pure electric variant.

These include the X1 SUV and the 7 Series limousine, which are powered by a next-generation combustion engine and plug-in hybrid options. 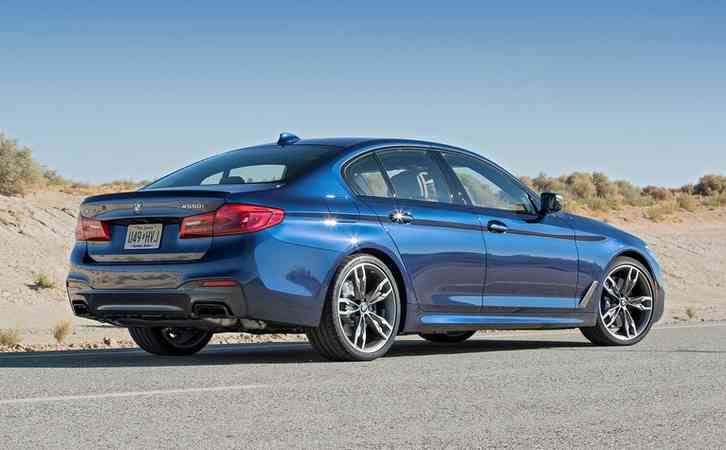 BMW subdued its 5-series with a simple, comprehensive facelift designed to steal the spotlight from the slightly more aggressive Mercedes E-Class and the fresh Audi A6.

All models will continue to be available with optional rear-wheel drive or all-wheel drive, called xDrive, except for the AWD-specific xDrive M550i.

The more powerful M5 will be updating in the not too distant future, reflecting a change to this more pedestrian series 5 models.

The prominent grille also looks more pronounced, and while the headlights get an L-shaped lighting element, the same elements have now disappeared from the taillights.

The exhaust pipes now all look the same regardless of the engine – keep the badge on, everyone!

Taller and wider, the new kidney grilles emphasize their kinship with the 7-series and X7 without displaying dominance.

The side view keeps the curious character line that turns into the C pillar. And the M550i is treated, as before, with bronze trim.

Overall, we liked the new look, and series 5 still looks more agile and sportier than the fatter competitors.

Inside, the visual changes are simple, with new contrast stitches as the most important enhancement.

However, the driver assistance and infotainment systems have improved markedly, with new cloud-based maps and a plethora of further options that do their best to distract you while potentially saving you the consequences of distraction.

While the 530i’s turbo-four engine remains unchanged, the 540i’s six-line power plant gets a 48-volt hybrid system that can offer a bit of a power boost to counter turbo lag.

The 530e plug-in hybrid, powered by a detuned version of the four-banger 530i, gets a much bigger boost from the 107-horsepower electric motor integrated into the eight-speed ZF automatic.

But perhaps our favorite engine remains the newly upgraded 4.4-liter V-8 in the M550i; at 523 horsepower, it is approaching the M5 while exhibiting more polite manners.